JANET SCOTT, harpsichord and portativ organ, has been active as a soloist and continuo player for over twenty-five years, performing in Canada, the United States, England, and Austria. Among her teachers are the 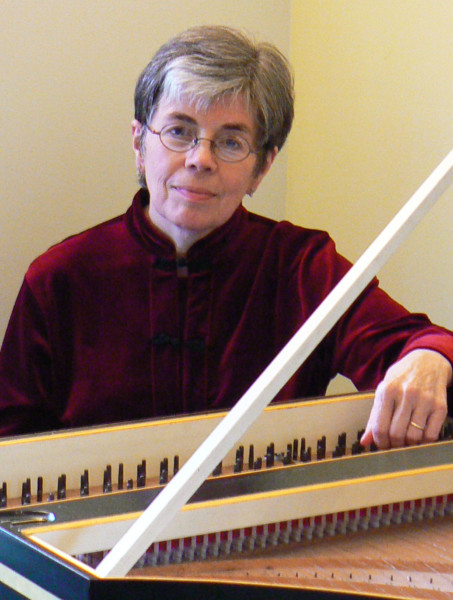 well-known British scholar and harpsichordist, Colin Tilney, and Elisabeth Wright, professor of harpsichord and forte piano at the Early Music Institute, Indiana University, where Janet earned her Master’s degree in Harpsichord Performance. In addition to receiving numerous Canadian government Arts Grants, Janet was also a founding member of two Baroque ensembles, served as manager of a Baroque orchestra, was the artistic director of the summer music series Music on the Red in Winnipeg, Manitoba.

Janet lives in Bloomington, Indiana with her husband, harpsichord-maker David Jensen, where she is a sound recording cataloger for the William & Gayle Cook Music Library at Indiana University. Janet is the harpsichordist with Generation Harmonique, a baroque ensemble based in Bloomington. She is also organist and choir conductor at St. Mary’s Episcopal Church, Martinsville, Indiana. Janet gives harpsichord lessons privately, performs regularly with the Bach Collegium-Fort Wayne, and freelances with ensembles in the U.S. and in Ontario. She recently played a program of Dutch Baroque Music with the early music group Harmonie in Toronto and Kitchener-Waterloo, Ontario.  A keen amateur viol player, Janet was editor of the VdGSA News, the Viola da Gamba Society of America’s quarterly newsletter from 2010-2012.